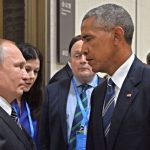 Thirty-five Russian diplomats expelled from Washington by President Obama after national security report that Russia had been behind a hacking scandal to influence the national presidential election. Although no vote tallies were affected, the seriousness of continued cyber attacks against both democratic institutions and other major targets sends an international signal that these attacks represent a major threat in the digital world.