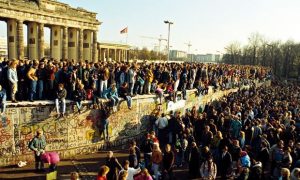 The Berlin Wall, after thirty-eight years of restricting traffic between the East and West German sides of the city, begins to crumble when German citizens are allowed to travel freely between East and West Germany for the first time. One day later, the influx of crowds around and onto the wall begin to dismantle it, thus ending its existence.