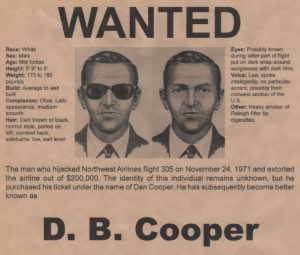 On Thanksgiving Eve, November 24,1971, a man who called himself, “Dan Cooper” skyjacked Northwest Airlines Flight 305 from Portland, Oregon to Seattle, Washington. Later known as “D.B. Cooper,” he demanded $200,000 in cash and four parachutes with a claim he had a bomb in his briefcase. Cooper jumped with the money to be never seen or heard of again.