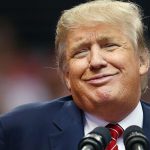 Donald Trump, the flamboyount billionaire businessman from New York with no political or military experience, wins a surprising election over Democratic challenger and former Secretary of State Hillary Clinton, the first woman to run for the highest office from a major party. Electoral victory by Republican Trump, 304 to 227, with seven electors voting against their pledge, two not voting for Trump, five not voting for Clinton, contained victories in Rust Belt states Wisconsin, Michigan, and Pennsylvania.